Enactivism positions the knower as an integral and active aspect of grander dynamical systems. That is, the knower is coupled with other knowers and affects while being affected by systems that include the more-than-human environment. Enaction is seen as a process in which a perceiving knower acts creatively to meet the requirements of a situation. Enaction is thus about systemic transformation rather than processing of information. 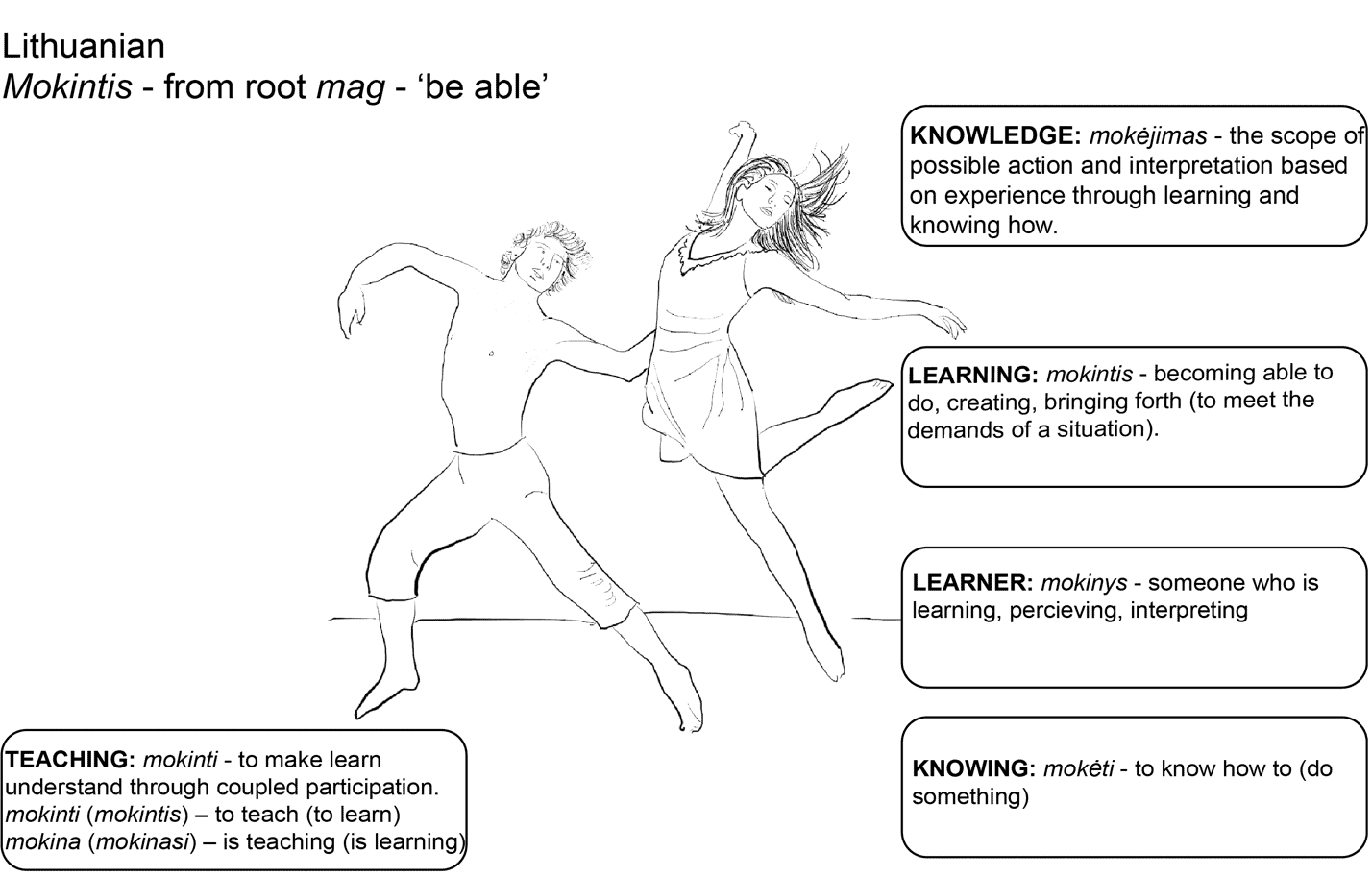 The starting point for the stem mok- is likely the root mag – ‘be able’ which was phonetically modified when followed by the suffixes -ti, -to1. The etymology of mokintis comes from móku – ‘mokėjau which means to ‘know how to do’, ‘be knowledgeable about’, ‘be proficient’. It is similar to the Latvian word mâcêt meaning ‘be able.’ Mokintis or mokytis involves a person’s effort to learn a new capability or skill. The syllable -in-, when used in a verb, adds reflexivity to it. The reflexive verb (lot. reflexivus) points to a subject taking a certain action (and is limited only to that particular subject taking that particular action). The syllables -jimas or -inys are used to create nouns based on verbs.

Common phrases of learning and teaching

Lithuanian is one of the oldest and most difficult Indo-European languages. Linguists mistakenly lump the Baltic and Slavic languages together. The Baltic branch is a distinct and separate group of languages and are presently confined to Lithuania and Latvia. With its ancient dialects, Lithuanian is similar to Sanskrit, as well as Greek and Latin. As such, Lithuanian is a spoken remainder of the old Indo-European languages1. The origins of the word mokintis – moku mean ‘be able’. “Be able’ suggests sensibilities about learning that are consistent with Enactivism, where all knowing is doing and all doing is knowing. While the Lithuanian language may be ancient, their concepts of learning are ahead. The similarities between the words are consistent with the Enactivistism sense of coupled participation: mokinti (mokintis) – to teach (to learn), mokina (mokinasi) – is teaching (is learning), mokino (mokinosi) – has been teaching / has taught (has been learning / has learnt). As such, the teacher is responsible to ensure learning. The root moke is also contained in science mokslas (mokslininkas) – science (a person deep into either science or biography or literature or studying specific topic). This provides an integrative sense as compared to the English the roots of science as schism – ‘to separate’. Fraenkel (1962)2 provides the following insights (as translated by S. Rothschuh) Lithuania has a special state-level institution that looks after the Lithuanian language use, sets common usage norms and provides guidance – it is called the State Commission of the Lithuanian Language (your might want to check their webpage at http://www.vlkk.lt/en). According to the Commission, the priority (especially in formal writing and speaking) should be given to the norm of neutral forms mokyti, moko, mokė (mokytis, mokosi, mokėsi), mokyti (mokytis) – to teach (to learn), moko (mokosi) – is teaching (is learning), mokė (mokėsi) – has been teaching / has taught (has been learning / has learnt). The forms “mokinti”, “mokina”, “mokino” (“mokintis, “mokinasi”, “mokinosi”) are considered by the Commission as secondary alternatives to the norm and may be used subject to features of functional styles, however they have the same meanings as their respective neutral forms. Mokėti has two meanings –“to know how to” (do something) and “to pay“, e.g.:

The root moku (be able) is present in teaching learning, learner, knowledge and knowing, suggesting coupled participation with each: mokinti (mokintis) – to teach (to learn), mokina (mokinasi) – is teaching (is learning), mokino (mokinosi) – has been teaching / has taught (has been learning / has learnt).