To distinguish or notice 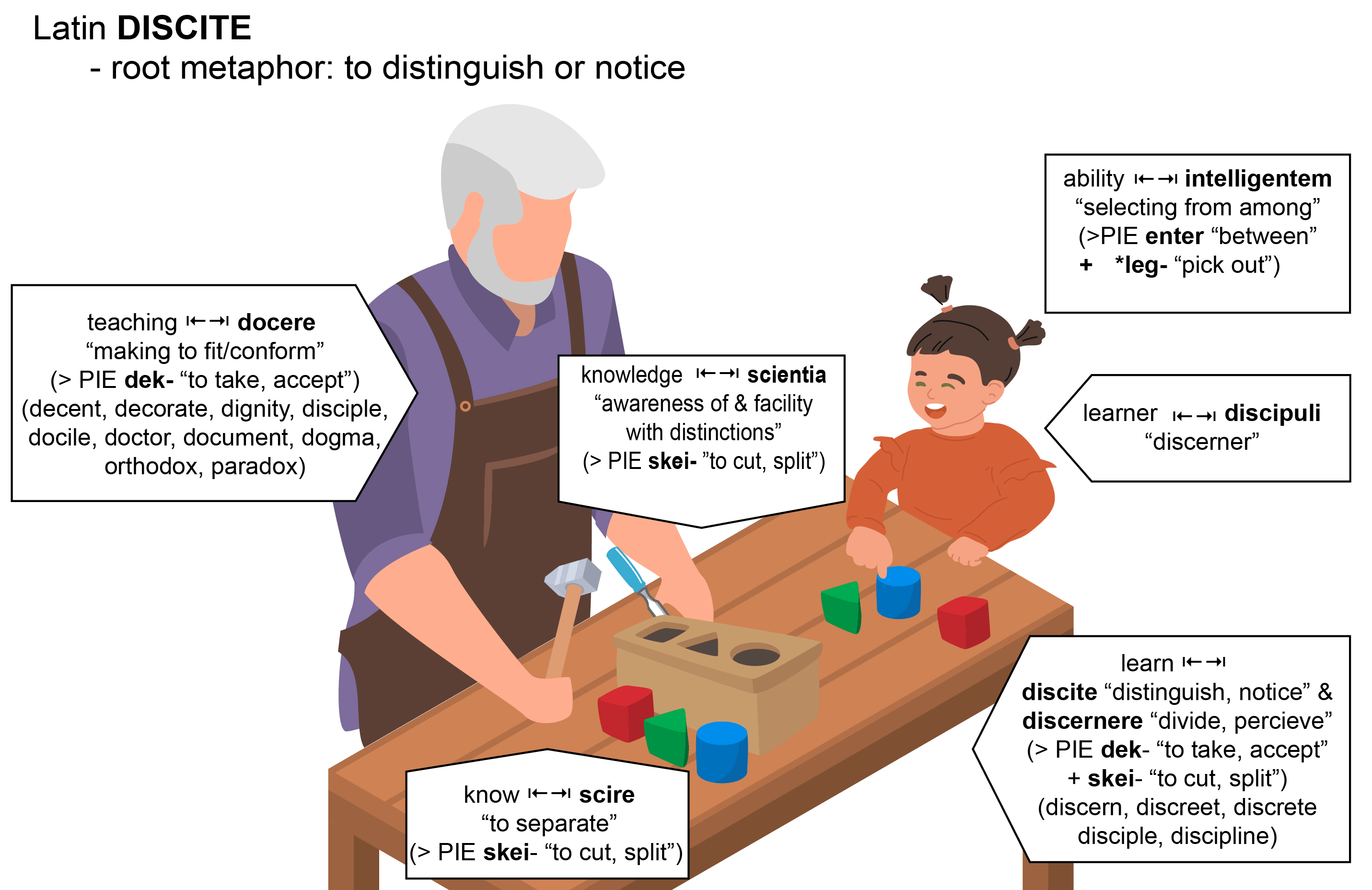 The most common Latin word for learn, discite, combines a pair of metaphors – dividing and accepting. The first metaphor, about taking or accepting, is derived from the PIE dek- “to take, accept.” Importantly, dek- is also the root of “doctor” and “dogma,” from the Latin doceo “teach.” The second metaphor, about dividing or separating, is derived from the PIE skei- “to cut, split.” It is the root of many English words, including “science” and scissors” (see more below). Combined in discite, these two metaphors suggest that the original meaning of “to learn” was likely something like “to notice and accept established distinctions.”

Latin is a dead language, and so we are compelled to extrapolate from remnants of meaning in English words that are derived from Latin roots.

English words related to the Latin discite, “to learn”

Isaiah 1:17 discite benefacere quaerite iudicium subvenite oppresso iudicate pupillo defendite viduam  Learn to do right; seek justice. Defend the oppressed. Take up the cause of the fatherless; plead the case of the widow.  Discite iustitiam moniti et non temnere divos! Having been warned, study justice and learn not to despise the gods! generatim discite cultus Learn each field of study according to its kind. ab uno disce omnes - from one, learn all – which refers to the universal truth within a single case.

English words related to the Latin doceo, “to teach”

docendo discitur It is learned by teaching / one learns by teaching docendo disco, scribendo cogito - I learn by teaching, I think by writing experientia docet - experience teaches mortui vivos docent - the dead teach the living quaecumque vera doce me - teach me whatsoever is true qui docet in doctrina Let those who teach, teach

Because Latin is a “dead language” (i.e., it isn’t a native language for a living community), the web of associations in this entry is largely based on inference – in particular, on extrapolations from associations among English cognates (in grey) of Latin words. That said, it is evident that two Proto-Indo-European roots figure prominently across the Latin web, namely skei- “to cut, split” and dek- “to take, accept.” Worthy of emphasis, skei- and dek- are combined in the Latin disciplina “teaching given,” which echoes strongly in English vocabulary for knowledge, learning, and teaching alike.